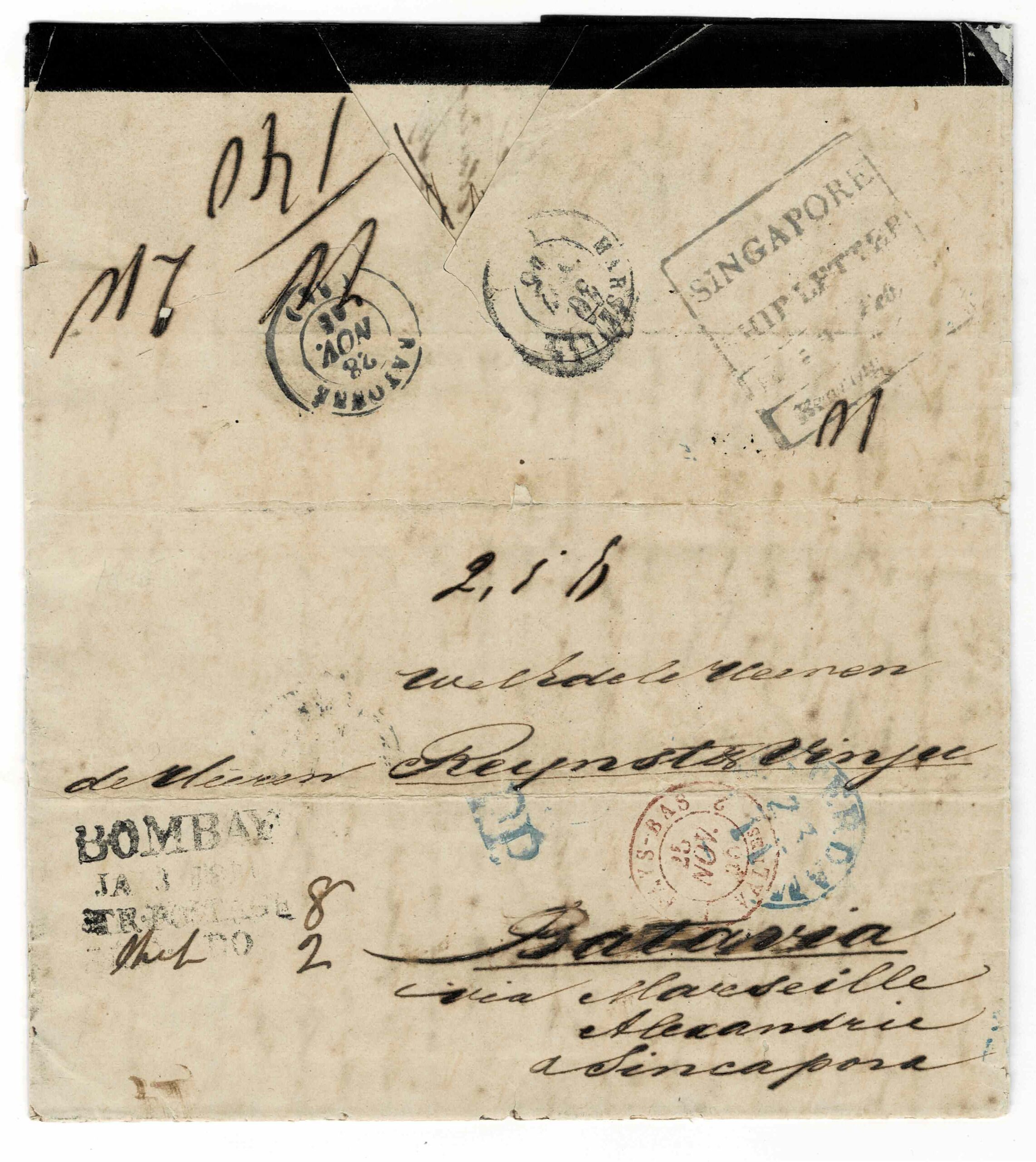 Figure 1 shows an entire (ex-Paul Bulterman) sent from Boxtel, Netherlands to Batavia, Dutch East Indies sent in November 1845. Fragile yet beautiful with various rate marks and handstamps, the letter shows the intended routing at the bottom: “via Marseille / Alexandria / Singapore”.

The black borders indicate death and/or mourning. Unable to read the writing, I put up my query on Twitter which brought out this response:

Why do I call the letter a “Perfect 10”? Well, it ticks (and ticks in style) all the three boxes important in a postal history item – routes, rates, and modes of carriage (of which six of them were in steamers of various hues and sizes!) Let me explain them in detail; it really is fascinating. So, grab a cup of steaming coffee and hang on; this is going to a longer-than-usual ride!

Before we look at the route taken by the letter, a few lines on the Peninsular and Oriental Steam Navigation Company‘s (P&O) ‘China Line’! This line connected the Far East and Europe and started operations in July 1845. Steamers connected Galle-Penang-Singapore-Hong Kong (9-12-13-14 in Figure 2) initially.

Now the benefits of the ‘overland’ route was made available to individuals and merchants at places touched by this line. And places not too far away like Batavia (Dutch East Indies) and Manila (Philippines). Rather than shipping their correspondence across the Cape on slow sailing vessels or trans-shipping to Bombay to catch the East India Company’s steamers to Suez, the China Line helped compress the time taken for letters to travel East-West.

Written at Boxtel, a town in southern Netherlands, the letter is datelined 24 October (on first page) as well as 22? November 1846 (its reverse). This was quite usual for merchant correspondence when the first dateline and the contents that followed were the duplicate of an original sent earlier. The second dateline and the contents below it would typically be the original. On the other hand, if it was a personal correspondence, senders would write some one day and some more some other day; remember, when postage was quite expensive then.

There are no postmarks of Boxtel. So, I presume the letter was carried under cover or per favour to Amsterdam where it was posted (I can claim no mastery of European postal history and comments are welcome). The letter was charged 210 Dutch cents (top left) as postage as the blue handstamp ‘P.P.’ (center) attests. Note that this does not mean the letter paid the rate all the way to Batavia; but only to Alexandria.

The rate charged to the sender can be explained as follows:

These rates come about as a result of postal conventions between Netherlands / Belgium / France. I prefer relying on primary sources but since I don’t read the languages they are in, I find it difficult to study them as much as I would like. So I relied on Delbeke (1998) for the rate analysis; the book on my lap and a mobile running a language translation app in my hands!

At Marseilles, the letter was put on Great Britain’s (GB) admiralty steamer – HMS Acheron – which journeyed from Marseilles (13.12) to Malta (17.12). At this time, the Marseilles-Malta route was operated by HMS steamers and not by those of the P&O.

How could Dutch letters be put on board British contract steamers? Well, this is because GB and France had executed postal conventions with each other (the latest being the 1843 Anglo-French convention) as had France and Netherlands. Under the terms of conventions, the cost of shipping due would pass from Netherlands to France to Britain.

There is also the possibility of the letter being carried by French packet to Alexandria. Either on the Louqsor from Marseilles (4.12) to Malta (7.12) to Beyrouth (18.12) to Alexandria (20.12) or on the Alexandre: Marseilles (5.12) – Alexandria (17.12). Both would have arrived at Alexandria before the Iberia (see next).

If we assume that the letter was carried by British packet from Marseilles to Malta, the Malta (17.12) to Alexandria (21.12) leg was performed by the P&O Iberia.

The overland route across Egypt is rightly thought to have revolutionised East-West communications. The route connected Alexandria at the north-west part of Egypt with Suez in the south-east. The distance between the two ports was about 250 miles. It comprised of the following stages:

It was gruelling across this route, especially for passengers. Only by 1859 did the railways connect Alexandria and Suez thus making the journey quicker and more comfortable.

At Bombay, the handstamp ‘BOMBAY / JA 8 1846 / STR. POSTAGE {8} / INLD. Ship DO. {2}’ (Giles SR6; ‘Ship’ overwritten on top of INLD.) was applied (the day looks like a ‘3’ but must be an ‘8’) (Figure 5) Basically, ‘8’ implies that the letter was assessed to pay eight annas (one anna was equal to one-and-half pence and hence eight annas was the equivalent of one shilling) steam postage for the Alexandria-India carriage. The Bombay post office also recognised that the letter needed to be connected outwards such that it could reached Galle to further connect with P&O’s contracted steamers; there being no packets which operated between Bombay and Galle at this time. This entailed outgoing ship postage of ‘2’ for two annas (per three tolas; one tola being about 0.4 ounces).

Since the post office didn’t have a handstamp for this kind of unusual happening, they used an existing ship receipt handstamp, overwriting INLD. with ‘Ship’!

Where is the Forwarding Agent

But who paid this charge of ‘10’ annas? There is no forwarding agent’s name mentioned on the cover; why would there be since this letter was never meant to be routed via Bombay? If there was no name, who could the post office collect the 10 annas from? The choice between the post office lay between detaining the cover indefinitely or letting the cover carry on its journey. Happily, for the recipient and us postal historians, the Bombay post office chose the latter!

How did the letter go to Galle? On the Ceylon Government’s steamer Seaforth (Figure 7). She sailed out of Bombay (9.01) the next day but I haven’t been able to trace when she reached Colombo. There aren’t many covers, if any at all, positively identified as being carried by the Seaforth from Bombay to Colombo but this is one of them.

The story of the Seaforth is interesting enough that I need to write a bit about her (unfortunately I haven’t been able to find any pictures). She was a steamer of 300 tons with engines of 30 hp built at Bombay. Purchased by the Ceylon government in October 1840, she was intended for service in the pearl banks. In 1841, as there appeared to be no prospect of revenue from pearl fisheries for several years to come, Seaforth was reengaged as a packet to carry mails between Colombo and Bombay to connect with the overland steamers from Bombay. She also carried mails from Europe, which had reached Bombay, to Ceylon. Like this one.

Post offices were established in both Colombo and Galle as far back as October 1798, if not earlier. While both towns are port cities in the south-west of Ceylon, I would think that the letter would have gone overland (about 70 odd miles) and not by sea.

Incidentally, it was the LMW which had inaugurated the China Line when she sailed out of Galle on 27 July 1845. She and P&O Braganza were the only two steamers on this line until mid 1847, after which larger and more powerful steamers were deployed by the P&O.

At Singapore, the post office applied the scarce ‘SINGAPORE / SHIP LETTER / 1846 Feb / Bearing’ (Proud SL1) handstamp. Even though the letter was carried by a packet steamer and not a ship. As I have mentioned before, I don’t think that the ’10’ close to this handstamp is a reiteration of the 10 (8+2) annas postage due that Bombay mentioned; rather it implies 10 gm and was superscribed in Amsterdam. The ink of it is exactly the same as that of ‘70’, ‘140’, and ‘210’ (Figure 3).

At Singapore, the Dutch war ship ZMS (Zijner Majesteits) Bromo had been waiting for four days to take the overland mails to Batavia. Bromo left Singapore (9.02) the next day reaching Batavia (12.02) three days later. The recipient’s docketing inside confirms that they received the letter that day.

It is interesting to note that, due to lack of connections at Suez, even if the letter was sent correctly to Galle rather than to Bombay, it would have made no difference to the recipient; they would have received the letter on 12 February either way. However, we wouldn’t have had as interesting a story as we have now!

This is not the end though. At Batavia the recipient had to pay 216 copper duiten as postage on this letter. This amount, which was written in black as ‘216’ just above the address, is broken up as below:

Postal history of international mails fascinates me. Until recently (or even into this day), postal historians have only studied ‘their part’ of an item i.e. the part(s) that they understood, leaving other, more difficult, aspects aside.

For instance, in the case of this letter, a Dutch collector will typically understand the significance of ‘210’ and the ‘216’ (Figure 8). But will struggle with the ‘8’ and the ’2’. An Indian collector, on the other hand, will know what the latter mean but will be clueless about the other numbers.

I don’t doubt that it is a difficult task to figure out everything about many postal history items, whether they belong to the classic period or even the modern post-World War II one. However, in recent times, with the publication of so many wonderful postal history books and with the help of all the information on the internet, I think that we are much better placed than ever, to study and understand ‘all parts’ of a postal history item. So, shouldn’t we?

And finally, shouldn’t postal historians from both sides of the divide collaborate with each other rather than being content with understanding what they are comfortable with? 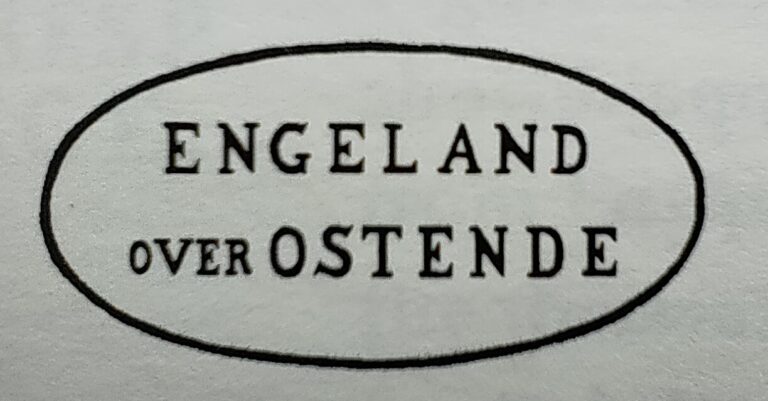 Print 🖨 PDF 📄 eBook 📱 This article was translated and republished, with some modifications, as “Non rubare se non per il Bene (la Storia Postale)! / Thou Shall not Steal but for (Postal History) Good!” Cursores 30 (November 2022). Cursores is the journal of the Associazione Italiana di Storia Postale. Shown in Figures 1… 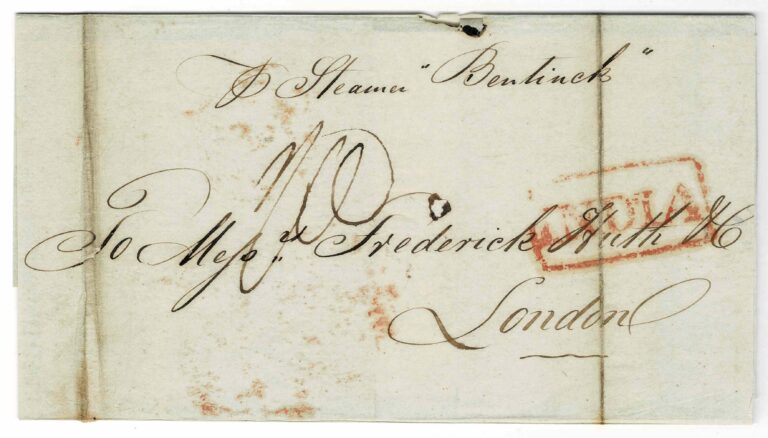 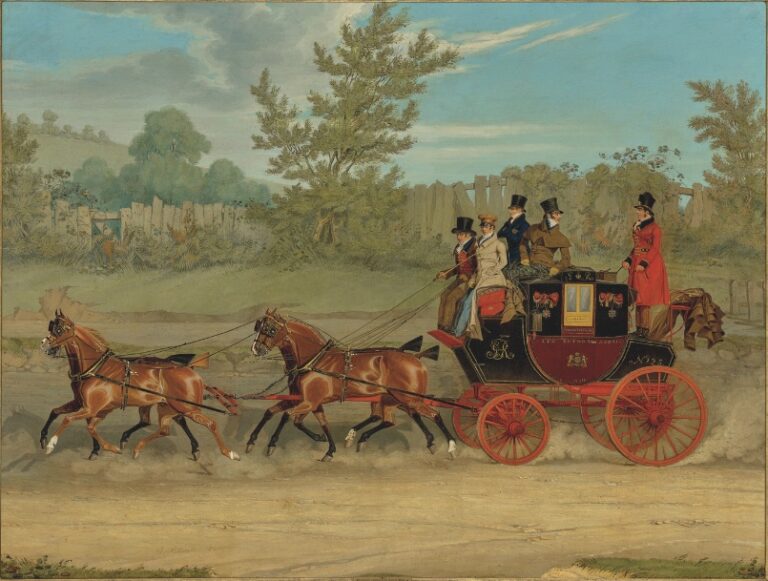