Signet. New Delhi: The Philatelic Congress of India, n.d.
Published Vol. 1 No. 1 October-December 1980 to Vol. 27 No. 3 October-December 2004; revived starting Vol. XXXIX No. 1 April-June 2016 (ongoing). The official bulletin of The Philatelic Congress of India. After the initial three years the Congress’ newsletter was rechristened as “Signet”. Apart from the first volume which contained six quarterly issues ending with Jan-Mar 1982, the other volumes contain four. Holdings: Complete.

Stamps Today. New Delhi: Vijay Seth, n.d.
Published May-June 2005 to March-April 2008 and then again from January-February 2014 to July-August 2015. The former period consisted of 11 issues since the journal was not issued regularly after the first eight issues. However the numbering was kept intact in the hope that they would be issued later. Hence after No. 8, the issued ones comprise only Nos. 13, 17, and 18. The latter period saw 10 regular issues. Total 21 issues all edited by Vijay Seth. Holdings: Complete except for issue No. 8.

The Philatelic Record. London etc.: Pemberton, Wilson and Co. etc., n.d.
Published February 1879 to December 1914. Vol. I No. 1 to Vol. XXXVI No. 12; 432 issues. Crawford 700, 701, and 114 of Supplement. Hailed by Dr. Manfred Amrhein as “…the nineteenth century’s greatest journal” (Ref. Philatelic Literature: History & Bibliography Vol 1). Holdings: Complete. Vols. I to XVII are Hard Bound (publisher’s binding) in either Red or Blue Cloth with gilt lettering on cover and spine. Gilt all edges. Each volume has as its frontispiece the photograph of a leading philatelist of the day. Vols. XVIII to XXXII are Hard Bound in Red Cloth with the covers and advertisements bound in at the end. Vols. XXXIII to XXXVI are Hard Bound in Blue Cloth without the covers or advertisements.

The Philatelic World. Calcutta: B. Gordon Jones, etc., n.d.
Published July 1894 to March 1897; 32 issues. Crawford 708. The second philatelic journal published in India after ‘Indian Philatelist’. Published by the famous Calcutta dealer, B. Gordon Jones. Served as the Official Organ of The Philatelic Society of Bengal. About 1,000 – 1,500 copies of each number were printed most of which were distributed free (Ref. The Journal of the Philatelic Literature Society Vol VIII No. 2). The journal discontinued as the Bengal society expanded into The Philatelic Society of India and started publishing The Philatelic Journal of India. Holdings: Vol. I No. 1 to Vol. III No. 26. Nos. 1 to 12 and 13-24 Hard Bound (publisher’s binding) in Dark Blue cloth with gilt lettering on spine. Unbound Nos. 25-26.

The Philatelist and PJGB. London: Robson Lowe International Ltd., n.d.
Published February 1981 to December 1998. Combined Vol. 1 No. 1 to Vol 18 No. 3; 89 issues. The Philatelist was revived in 1934 by Robson Lowe after ceasing publication in 1876 while The Philatelic Journal of Great Britain (PJGB) was published continuously since 1891. In Feb 1981 the two journals merged. It was published bi-monthly from 1981-91 and quarterly from 1992-96. No issue was published in 1997 and the last three issues of 1998 was published by Spink. Holdings: Complete. Staple Bound in White Card Covers.

The Stamp Collector’s Magazine. London & Bath: E. Marlborough and Co. & Stafford Smith and Smith (till 1866) & Alfred Smith & Co., n.d.
Published February 1863 to December 1874; 143 issues. Crawford 777. The second philatelic journal in the world. Edited by Dr. C(harles). W(illiam). Viner till about end-1866 and thereafter by George Overy Taylor. Holdings: Complete. Hard Bound in Brown Cloth with gilt lettering on spine and uncut pages (excepting Vols 7 and 12 which are cut and bound in boards). All volumes have the index page and all volumes (excepting Vol 7) have the advertisements. 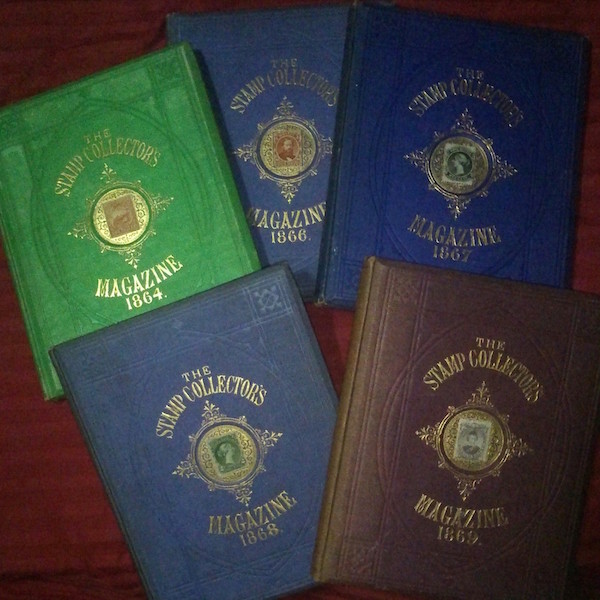 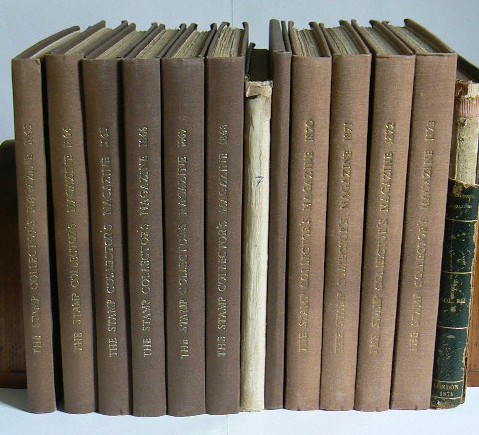 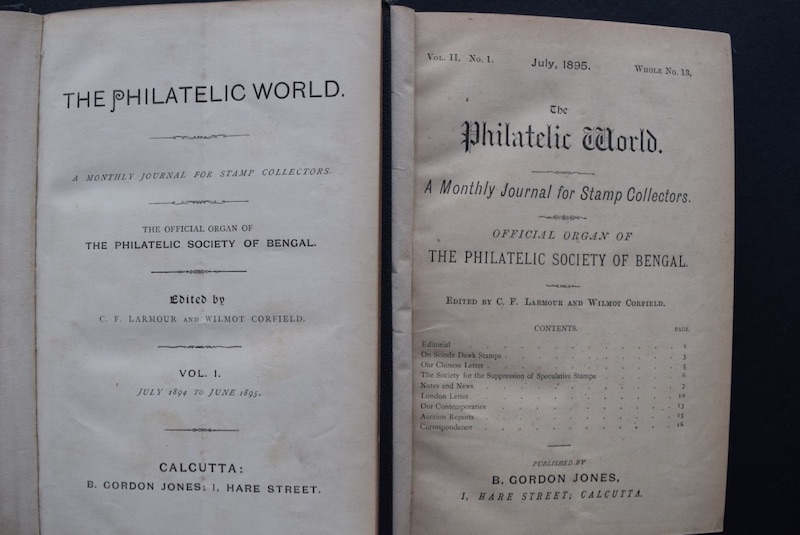 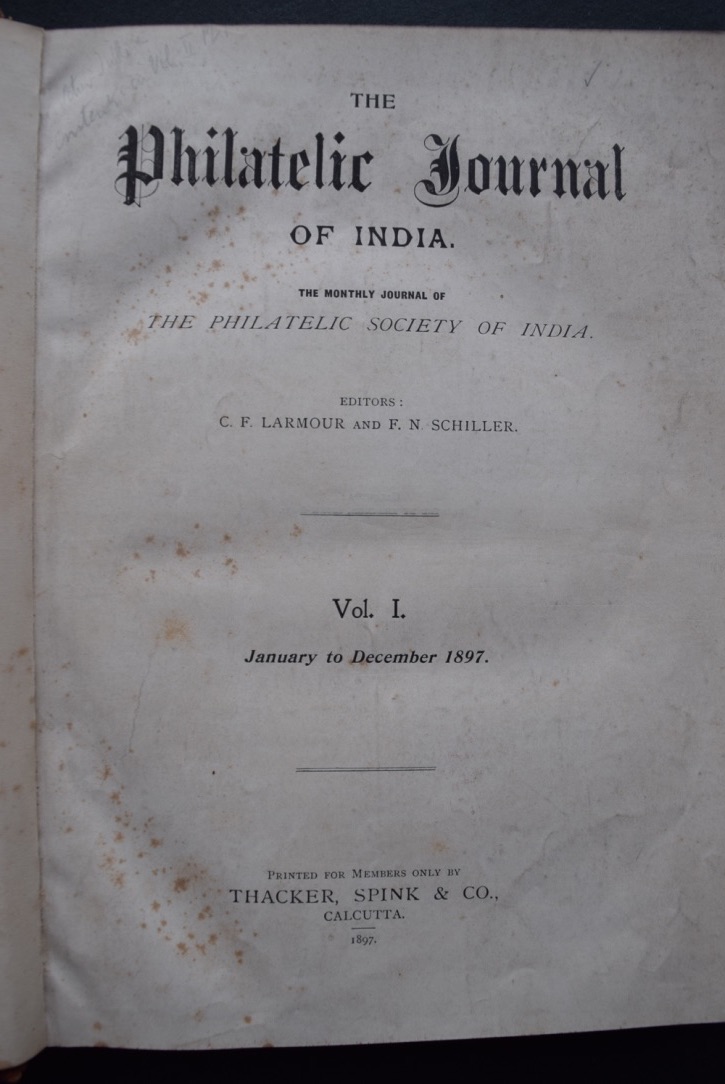 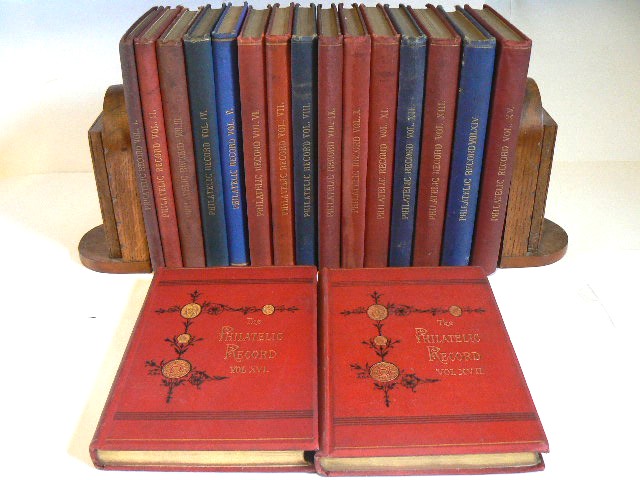